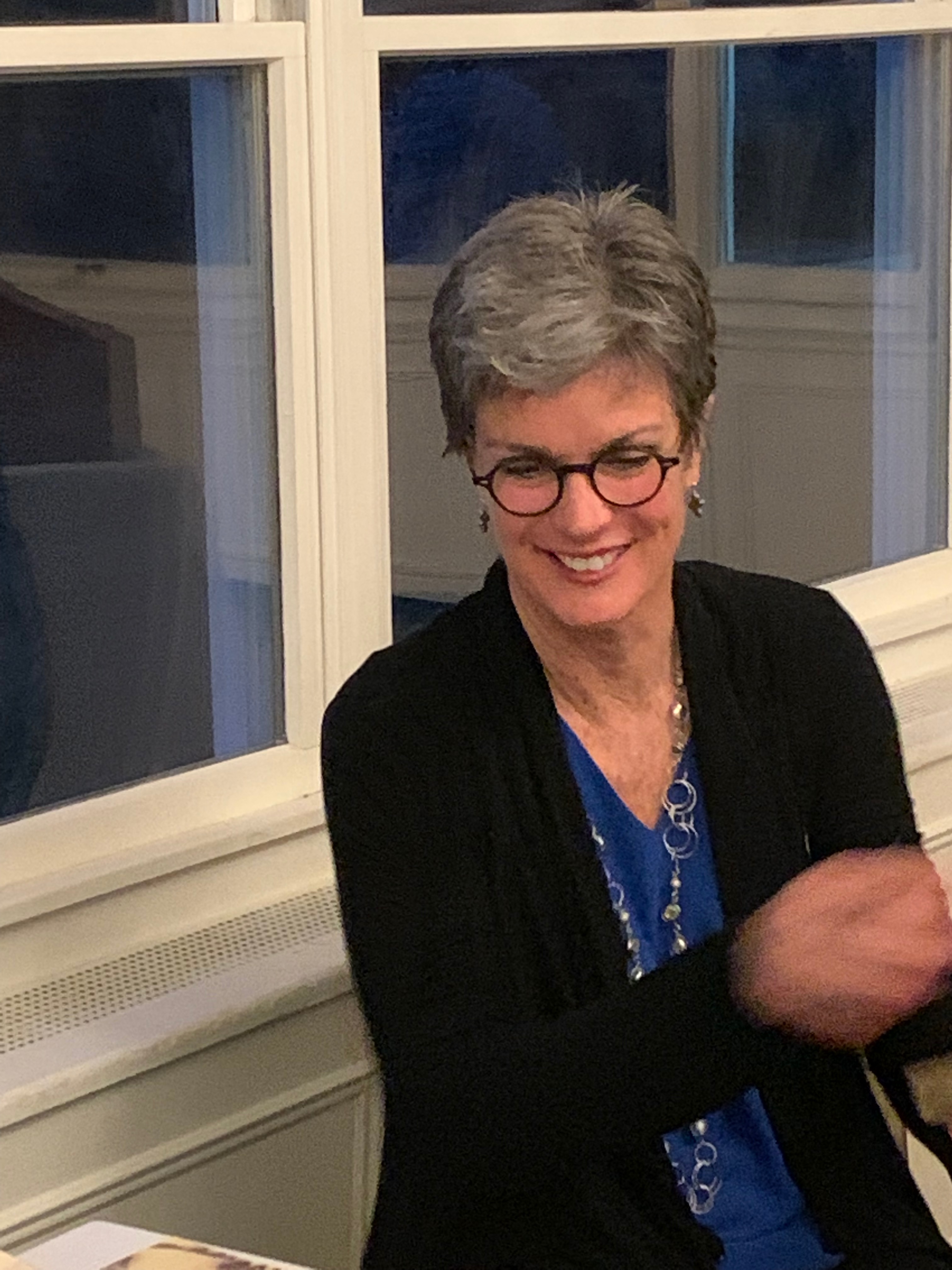 The annual meeting of the Manchester Historical Society was held on May 3rd at the Manchester Country Club.  We enjoyed the meal and pleasant conversation with the other guests at our table.  Then Susan Campbell, author, and former Hartford Courant journalist approached the podium and began a personal and heartwarming talk about her childhood, her career, her books, and local and not so local history.

Susan fully engaged the audience with her sense of humor, anecdotes about her life, and opinions.  She found common ground with those interested in history by speaking of her love of stories, sentences, facts, and research. Growing up in the south in a “family of storytellers and liars”, she spent her girlhood trying to discern between the two. She also developed a love of reading and spent time at the local library and reading every magazine that came into her house including Time, Newsweek, and Redbook.

In 7th grade, Susan learned from her teacher that the civil war was about slavery. Up until then, she had been told that the “War of Northern Aggression” was about states’ rights.  She began to question what she had been taught in school and church. She decided she would have to discover facts for herself and to seek the real story.  She could no longer just accept what she was told by her teachers and preachers.

In today’s information age, as we are bombarded with details from a variety of media sources at all times of day, it is even more difficult to discern fact from fiction. Susan said, “This is a time for truth-tellers because if we listen to one another’s honest story then we are bound by our humanity to think of one another as something besides the ‘other'”.   She continued, “At some point, we’re going to have to stop and gather around the campfire and reacquaint ourselves with our stories.  Truth is all. Truthful stories are everything.  The truth will both save us and set us free.”

In becoming a journalist she “was drawn most to people without a voice” and found famous people to be as dull as the preachers she was forced to listen to in those long ago Missouri churches. Too many of the questions she considered asking famous people had been asked and answered already.  She was more curious about the people who no one wanted to talk to. Given her upbringing,  Susan’s writing became an act of defiance.  Her career as a journalist included stops at the Joplin Globe, Wichita Eagle Beacon and finally the Hartford Courant.

Susan wrote for the Hartford Courant for 25 years.  In writing about “people with stories to tell but no one to listen” she discovered her own ignorance about various groups of people. This realization delighted her and was the motivation to continue to educate herself.  She also gave speeches on journalism and was occasionally questioned by uninformed suburban residents if she really went into “scary old Hartford” to investigate for her stories.  Susan declared, “People fed on a steady diet of crime and aberrations from a particular location will start to believe that those aberrations are the norm.”  However, despite many years of work in all of Hartford’s neighborhoods she only had something stolen from her in Glastonbury.

Encouragement to write and publish her first book came from Wally Lamb who was a fellow participant in a writing group.   During one group meeting, Susan was met with complete silence after reading about her experience being baptized a fundamentalist until Wally Lamb spoke up and told her to write more about that. Dating Jesus: Fundamentalism, Feminism and the American Girl was written to enlighten people about “the mostly false public narrative about fundamentalism.”

Her second book, Tempest Tossed;  The Spirit of Isabella Beecher Hooker was inspired by research for a series of Hartford Courant short stories about three of the four Beecher sisters.  Susan’s assignment was Isabella.  She visited the Harriet Beecher Stowe Center to read Isabella’s letters and soon “fell in love with this misunderstood, mouthy woman.”

The idea for Susan’s most recent book,  FrogHollow: Stories from an American Neighborhood began during walks around the Frog Hollow neighborhood.  She discovered great restaurants and the architectural style apartment building unique to Hartford known as “perfect sixes”.  These walks evoked nostalgia for her hometown of  Webb City, Missouri which like Hartford gave her the feeling that “something happened here and I missed it.”    She talked to people, took notes, researched the history of the area and then decided to write another book.

After answering some question, Susan autographed and sold copies of her books.  She continues to research Isabella Beecher and Frog Hollow. Nowadays you can find Susan Campbell teaching journalism at the University of New Haven.