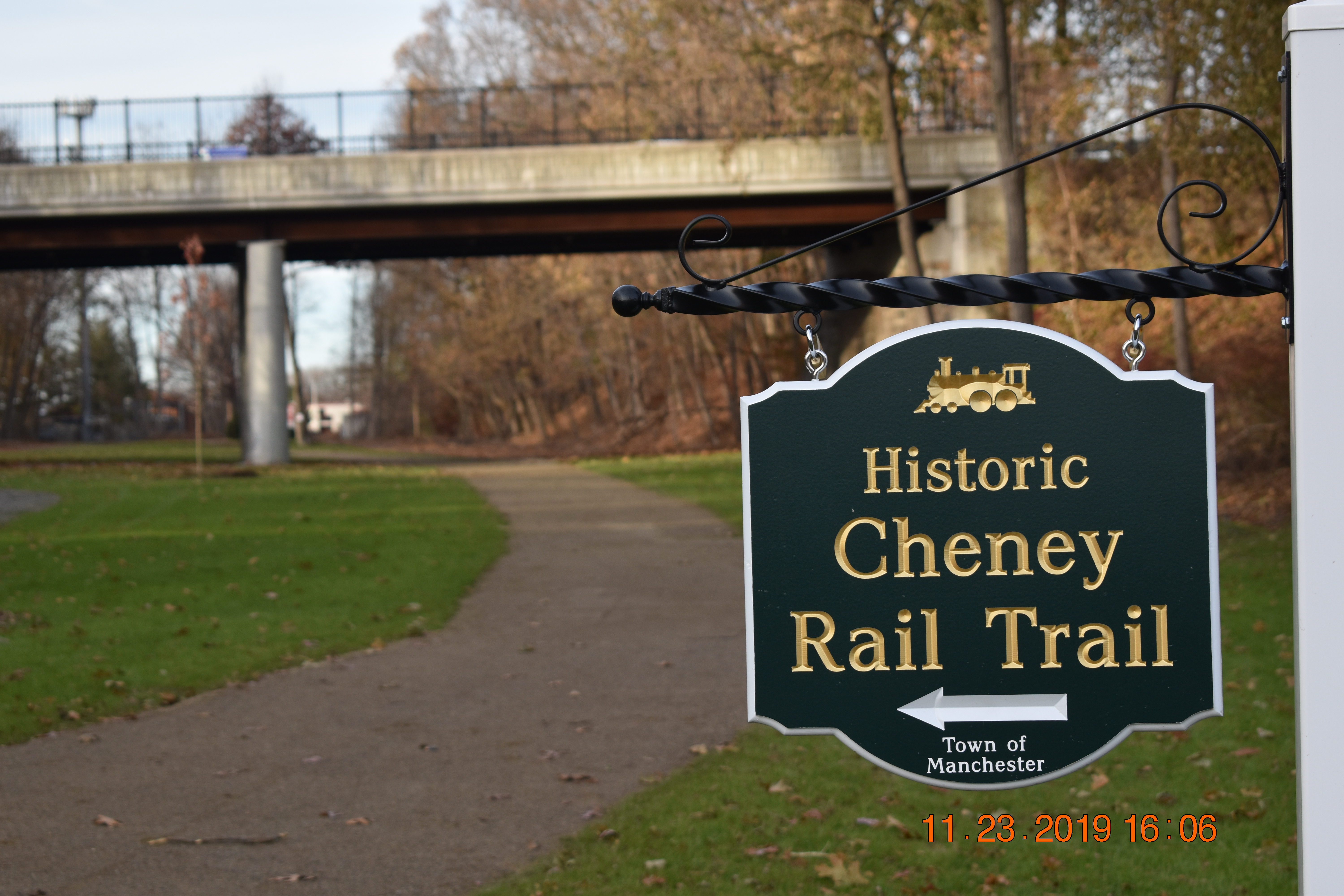 In November, 50 people (including me) set off from the Fuss & O’Neill office building on Hartford Rd. to enjoy a talk about local history and experience the most recent addition to the Manchester parks on the newly completed southern portion of Cheney Rail Trail.

The group hiked from Fuss & O’Neill on Hartford Rd. to the start of the new trail behind the Lofts at the Mills Apartments.  Then, on the trail, under the Park St bridge and up to Center St where we had to leave the trail briefly to cross Center St.  The new railroad trestle over Center St had not been completed at that time. The walk ended at Center Springs Park.  We returned along city streets.

Susan Barlow led the hike and provided information about the history of the Cheney Railroad and the surrounding area.  The talk came alive with stories of bygone days in Manchester and the use of pictures taken over 100 years ago of the areas we were standing in and walking through.

The first site of historical significance is Old Engine Company Number One.  The firehouse located at the corner of Pine St and Hartford Rd was built by the Cheneys and donated to the town.

Next stop on the tour was the Velvet Mill.  The Cheneys were interested in hiring skilled workers.  Some of the most skilled workers lived in Non-English speaking countries.  These workers arrived in Manchester from around the world to work at the Cheney Mills.  To overcome language issues, newly hired workers were given a card with a letter and a number on it similar to the V1 painted on the Velvet Mill in the picture.  This indicated the correct building and entrance to begin work.

Across the street from the Velvet Mill is the Clocktower Mill.  The smokestack in the background is still in pretty good shape so it has been re-purposed as a cell phone tower.

Almost all of the old mill building are now apartments.  During the walk we stopped frequently while Susan explained interesting architectural features of the buildings, when they were built, and what was produced in each one.

In addition to the Velvet Mill and Clocktower Mill, there was a Spinning Mill, Ribbon Mills, machine shop, dye house, silk storage vaults and a storage building large enough for a railroad car.

The Cheney Rail Service carried silk and passengers between the north and south ends of Manchester.  Large locomotives weren’t needed for these relatively light loads and a smaller engine called a Yard Goat was used.  Yard Goat?

The trail begins right near the old railroad yard.

Some of the tracks were in good shape and were kept in place to create a sense of authenticity.

One of the conductors lived in this house overlooking the rail yard right before the Park St. Bridge.

The trail is 2.5 miles long and ends at Farr’s Department Store in the North End of Manchester.  The railroad was the shortest line in the United States but had the unique distinction of having more linear feet of tracks in the railroad yard than on the 2.5 mile route.

There are some great views from the bridge overlooking Center Springs Park.

The next free rail trail hike on the Cheney Rail Trail is scheduled for this Sunday at 1:00.  This hike will begin at the north end of the trail.  The meeting location is 2 Main St.  I highly recommend this activity!!!