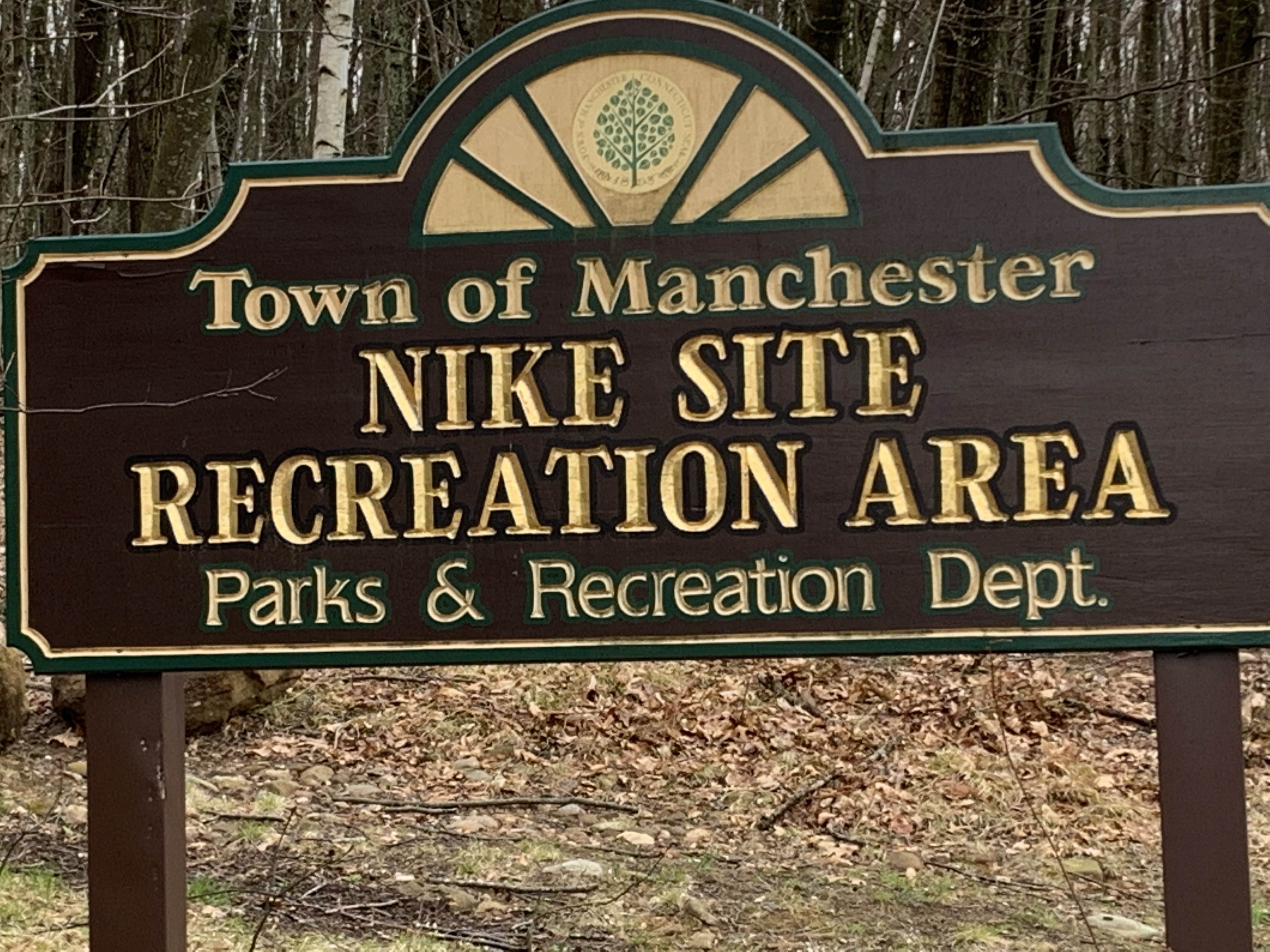 The Nike Site, off of Keeney St at the end of Garden Grove Rd., is a fascinating place to explore. From 1957-1961 the land was a U. S. Army anti-aircraft defense site. There were twelve of these Nike Sites in CT.  The installation in Manchester protected this area (Hartford? Pratt & Whitney?) from military planes that entered our airspace. The army used radar and missiles to detect incoming enemy planes and was considered a last line of defense to protect the U.S. during the Cold War. The military decommissioned the site in 1961 as advances in technology made the missiles obsolete. I don’t think the deployment of any missiles ever happened from the Manchester Nike Site (or any of the sites for that matter).

When the army returned the land at the Nike Site installation to the town of Manchester,  the recreation department found another purpose for the area. Today there is a pre-school, indoor shooting range, baseball field, the CT Concert Ballet, pickleball courts, hiking trails, and some buildings that look empty but (peeking in the windows) are obviously used for storage.

The trails are not well marked at Nike.  The Recreation Department has this little booklet of town trails with maps, but the Nike Site did not make the final cut.  Here is the link to the town’s little hiking booklet:

On the CTMQ website, I found this map of the trails (which I have altered slightly) . The CTMQ blog is one of my favorites, and when the CQ is over and you are looking for something to do in CT, you need to go to the website and check it out. You won’t be disappointed. Here is the link: http://www.ctmq.org

Hiking on the Nike Site trails and abandoned roads is an opportunity to look back at the land-use history of this area since 1957. There is an abandoned, (serious) double yellow line road that connected what is now Hercules Dr. to Faith Circle. Army officers and their families lived on Faith Circle.

A radar tripod was at one time attached to the three metal plates of this cement pad.

There is a cairn where you take another trail out to Manchester Country Club.

I found an abandoned ski slope and an abandoned baseball field, to be the most intriguing elements. Internet research reveals that the ski area was called Northview Ski Slope. It was open from 1969-1979. Vandalism, including cutting the ropes on the rope tow and driving a four-wheel vehicle into the rope tow building caused the town to shut it down.

Most of the poles from the rope tow are still standing with the pulleys attached.  Only this one has fallen over.

Trees and brush now cover most of the ski slope, making it hard to visualize people skiing on that hill.  But, there are a couple of clearings on the old trails where you can still picture people coming down on their skis.

One of the trails looks like it had a good view of Hartford.

Last but far from least, is the abandoned baseball field. The field is down in a valley closer to Hackmatack St.

I couldn’t find any mention of the field on any sites related to the U.S. Army use of the Nike Site or the Manchester Recreation Department. I think the soldiers working at the installation used the field.  The only evidence of access to the grounds is a path from Faith Circle.  It doesn’t look like there was ever a road or parking area down there.

Was the field used only for pick-up games between those stationed in Manchester? Maybe teams from some of the other Nike Sites in the region came up to play.

Here are some pictures of the old backstop and old cedar posts that held the player’s benches.

More photos of the area include home plate and the pitcher’s rubber.

This trail off of Faith Circle takes you down to the field.

Every time I walk around the Nike Site, I discover something new.  I haven’t hiked the trail out to the golf course yet.   I am grateful for the creative people who have used this land and the buildings for recreation rather than just abandoning it like some of the other Nike Sites.