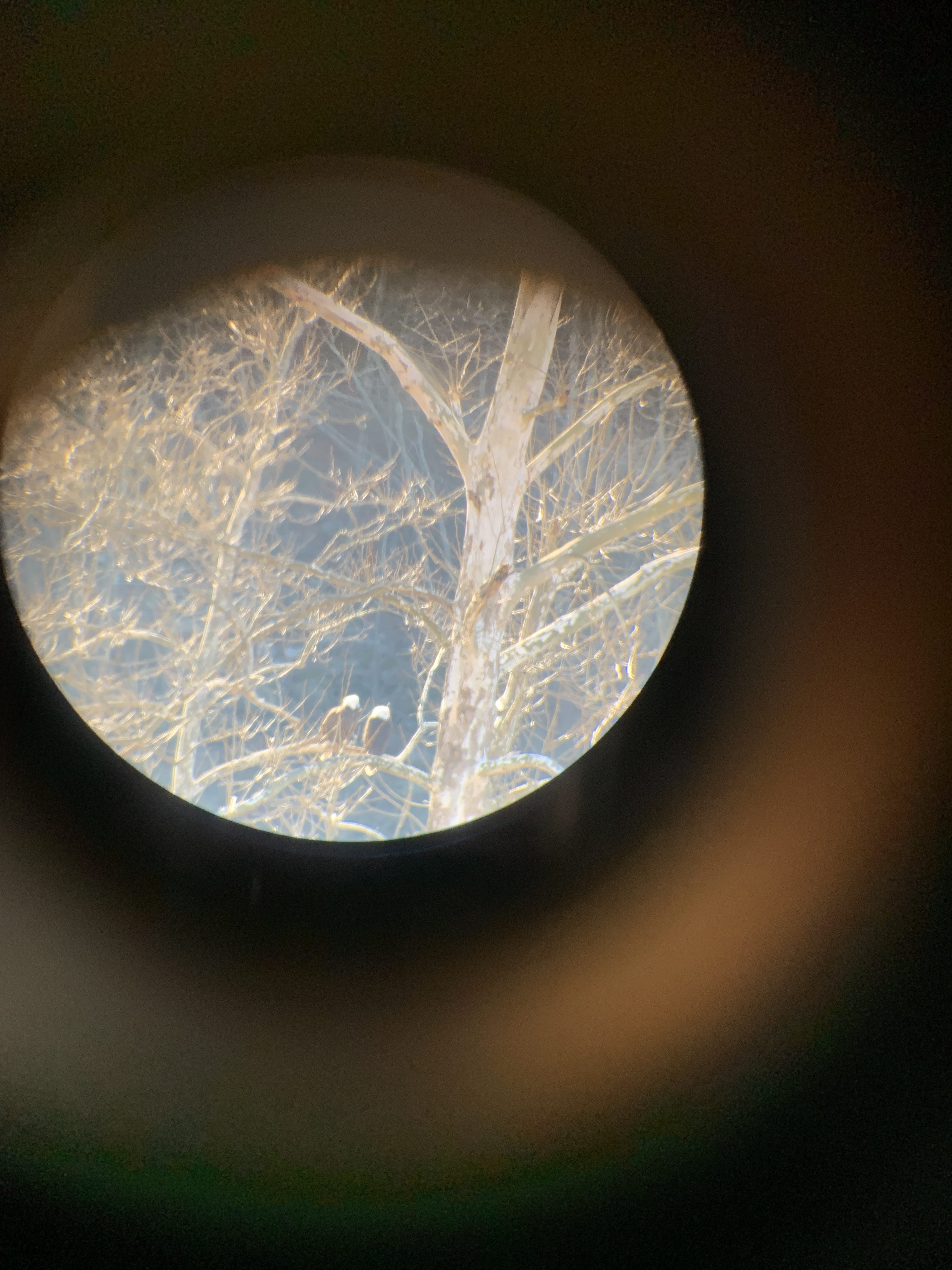 In early February, before we were under CQ, we took a ride out to the Shepaug Dam in Southbury one Saturday morning. The gate is opened by a volunteer at 9:00 a.m. and cars are directed down a short road to the parking lot for the Eagle Observation Area. Visitors can view and photograph eagles and other winter birds. A wooden shack, divided into two small rooms, serves as an indoor observation station with large openings facing the river. One side of the cabin was open space, and the other had telescopes set up. There were also wooden benches pushed under some counters along the walls and a small heater.

The shelter is about 100 yards from the Housatonic River, where the eagles like hanging out. A more powerful camera lens is needed to get a close-up shot. This picture was taken with my camera.

One of the volunteers helped me take this picture using my phone held up to a telescope.

Around 10:00 a.m., the volunteers asked all visitors to leave one of the rooms so they could set up for a program. The telescopes were removed, and the benches were pulled out from underneath the counters. Rows of seats were set up like in an old-time one-room schoolhouse. A speaker from the Audobon Society of Fairfield proceeded to share information about some of the previously injured birds she brought along. Volunteers at the Fairfield Audobon Society nurse the birds back to health. The birds continue to live out their lives at the refuge because they would not survive in the wild.

During the talk about the birds, each was identified. If memory serves, the identities of the birds in the captions are correct.

The Shepaug Dam is only about an hour from Manchester. Eagles like to fish there in the winter because the water doesn’t freeze. This year with the warm winter in Connecticut, very few lakes froze over. Eagles had many bodies of water to find fish in northwestern Connecticut. So, fewer eagles were hanging out at the Shepaug Dam.

I am grateful to the people who volunteer to care for birds and animals and build structures for viewing and donate time and expertise. I long for the post-CQ era to once again meet in groups and learn from knowledgeable people about the incredible variety and beauty on this magnificent planet.